Materials for the next-generation solar cell 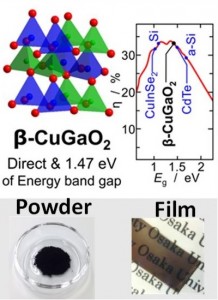 The mainstream material of the solar cell has been Si since a long time ago. However, Si solar cells are always quite thick; this is because Si is an indirect semiconductor with a low light absorption coefficient. Therefore, Si solar cell has some problems like high raw material cost and heavy weight. To solve this problem, thin-film solar cells utilizing direct compound semiconductors, such as CdTe and CIGS (CuInGaSe2), have been developed and some of them are already on the market. But these compounds containing Te or Se are easy to be oxidized in air and therefore the costly vacuum processes are required. Only if there is an oxide semiconductor which is suitable for thin-film solar cell, we can use following advantages of oxides and provide safe and low-cost thin-film solar cell.

In our lab, we designed the novel oxide semiconductor for the solar cell and discovered a new material, β-CuGaO2, for the first time. This material has the band gap in the region where the highest conversion efficiency can be achieved and high light absorption coefficient comparable to CdTe or CIGS. Now, we are developing the technique to fabricate the β-CuGaO2 thin film and control the its conductivity as well as studying its fundamental properties by first principles calculations.

The conversion efficiency of the solar cell using Si or compound semiconductors is 30% at most. It cannot provide all energy you need in a daily life from the roof of your house. If there is a solar cell with higher efficiency, it may be possible to develop a self-sufficient system in our society.
The nano-scale crystals of compound semiconductor (so-called quantum dots or QDs) have a unique property; it generates multiple electrons under illumination of just single photon. Therefore, the solar cell utilizing quantum dots (QDs solar cell) are expected to be the next-generation ultrahigh-efficiency solar cell.
In our lab, we developed the novel and safe fabrication process of quantum dots of InAs. In the present, we are now improving this fabrication process.