Materials for the next-generation fuel cell 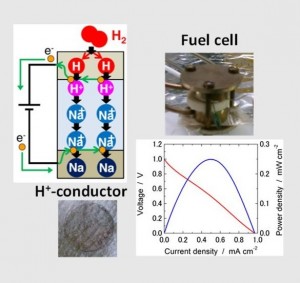 The fuel cell is expected to be a suitable power source for various scales; large-scale, household-scale and mobile-scale power generation system. Some fuel cell systems are already on the market. One of them is Solid Polymer Fuel Cell (SPFC) which uses a polymer as electrolyte. This operates under 100℃ and therefore expensive noble metal catalyst is required to accelerate the reaction. The other one is Solid Oxide Fuel Cell (SOFC) which typically uses an yttria-stabilized zirconia (YSZ) as electrolyte. This system operates at 800-1000℃ to keep O2- ions mobile in the electrolyte and therefore the whole system has to be heat-resistant, which is one reason the system is very expensive and keep it from being popular.

The intermediate-temperature fuel cell works at 250-500 ℃ and is the literally “intermediate system” which does not need either noble metal catalyst or heat-resistant structure. It is expected as the next-generation system and would be cheaper than the present ones. Then, why this system is not realized now? Just because there is no ion conductor in which either H+ or O-2 is mobile enough at the intermediate temperature.

In our lab, we are developing the solid state electrolyte which is ion-conductive and suitable for intermediate-temperature fuel cell. Until now, we developed the novel process itself to inject H+ ions into glass electrolyte in extremely high concentration (10-20mol･L-1) and realized the world-highest-level proton-conductive glass. In the present, we are improving this glass electrolytes and developing the electrode materials suitable for them.