A newly proposed technique enables rapid 3D image acquisition. One-scan is a technique involving an elongated light spot that resembles a "needle" which captures three-dimensional (3D) images of a specimen.

The new method, which was developed by researchers from Tohoku University and Osaka University, can rapidly take 3D images without moving the observation plane - something necessary in conventional laser scanning microscopes.

Light microscopy is ubiquitous and vital for various fields including life science and medical diagnosis. As many biological cells or tissues are structurally complex, 3D observation is crucial. Laser scanning microscopy is a representative and well-established approach that enables 3D observation by scanning a focal spot on the sample. One major issue is its time-consuming procedure because it involves repeated 2D image acquisition that requires changing the observation plane.

The researchers used a laser spot elongated along the axial direction, referred to as "light needle," as illumination in laser scanning microscopy. In general, the use of such a light needle is a common approach that produces deep-focus images capturing the extended depth range of specimens without blurring. However, this approach only provides a 2D image, which does not include any depth information of a specimen. 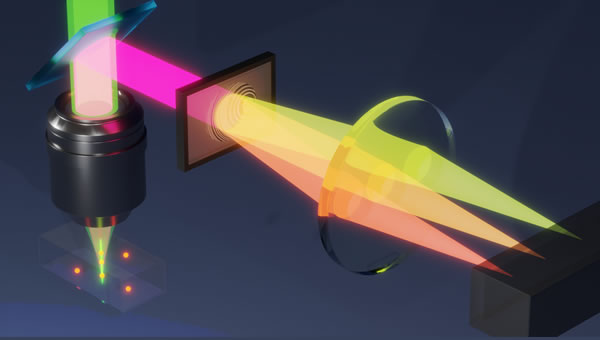 The solution proposed by the researchers was manipulating fluorescence signals emitted from specimens through a technique based on computer-generated holography (CGH). They devised a hologram to be applied to fluorescence emitted from different depth positions inside the sample. This hologram was designed to produce laterally shifted and spatially separated images at the detector plane depending on the depth position of objects. With this technique, the depth information can be recorded as the lateral information simultaneously, allowing for the construction of 3D images without changing the observation plane.

Using this principle, the researchers developed a microscope system equipped with a spatial light modulator, a computer-controlled apparatus to project the CGH. The developed microscope system constructed a 3D image from a single 2D scanning of a light needle for the depth range of 20 microns. This system recorded 3D movies of dynamical motions of micron-sized beads suspended in water, something rarely achieved by existing laser scanning microscopes.

Video-rate acquisition of 1-micron fluorescence bead suspended in water. The 3D region with a depth range of 20 microns was repeatedly recorded by 2D scanning of a light needle with a rate of 31Hz.
©Yuichi Kozawa et al.

The researchers also demonstrated the prompt 3D image acquisition for thick biological samples with a speed more than ten times as fast as the conventional technique. The proposed technique will notably speed up image acquisition in various research and industrial fields, where the 3D image observation and evaluation are essential. The researchers are now planning to further extend the applicability of the proposed method to downsized systems, targeting its use in practical applications.