Matter behaves differently when it's tiny. At the nanoscale, electric current cuts through mountains of particles, spinning them into vortexes that can be used intentionally in quantum computing. The particles arrange themselves into a topological map, but the lines blur as electrons merge into indistinguishable quasiparticles with shifting properties. The trick is learning how to control such changeable materials.

For the first time, researchers have taken a microscopic look at this process. The international team has now published their results on July 11, 2019 in Communications Physics, a Nature journal.

In certain conductive materials, such as Manganese Silicon (MnSi), the quasiparticles can accumulate into a magnetic skyrmion with a vortex-like shape and motion. The skyrmion creates a lattice of connection points within the MnSi crystal. 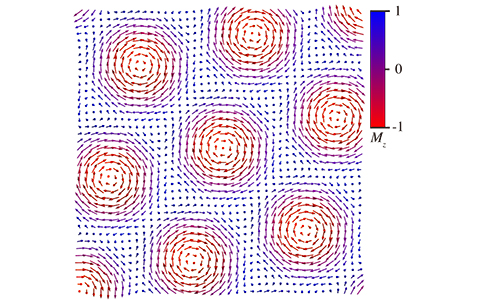 "Magnetic skyrmions have attracted interest due to the potential for spintronics applications," said Taku Sato, study author and professor at the Institute of Multidisciplinary Research for Advanced Materials at Tohoku University.

Spintronics refer to theoretical electronics that rely not only on the charge state of a current, but also on the characteristics of electrons to transfer and store quantum information.

"The first step to realize such spintronic applications of skyrmions may be electric current control of skyrmion flow," Sato said. "Once created, the skyrmion can almost never be annihilated. It also strongly couples to electric current flow, meaning it takes very little current to move the system."

To understand how electric current affects the magnetic skyrmion changes under an electrical current, the researchers used a method called small-angle neutron scattering. They powered a neutron beam through a MnSi crystal, causing the skyrmion particles to react -- the neutrons literally scatter against and around the components of the skyrmion system. How they scatter tells the researchers about the system. 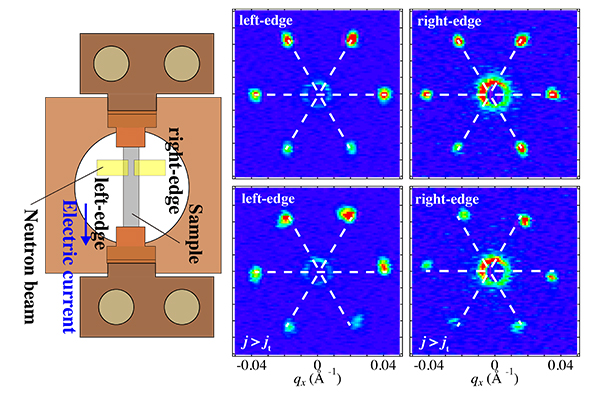 "Such a friction effect has not been reported to date as far as we are aware of," Sato said. "It's fundamental key information for the realistic spintronics device design utilizing magnetic sykrmions."

Sato and his team plan to further investigate the dynamics of magnetic skyrmions with the eventual goal of developing spintronic devices.